Use my current location 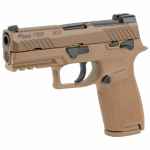 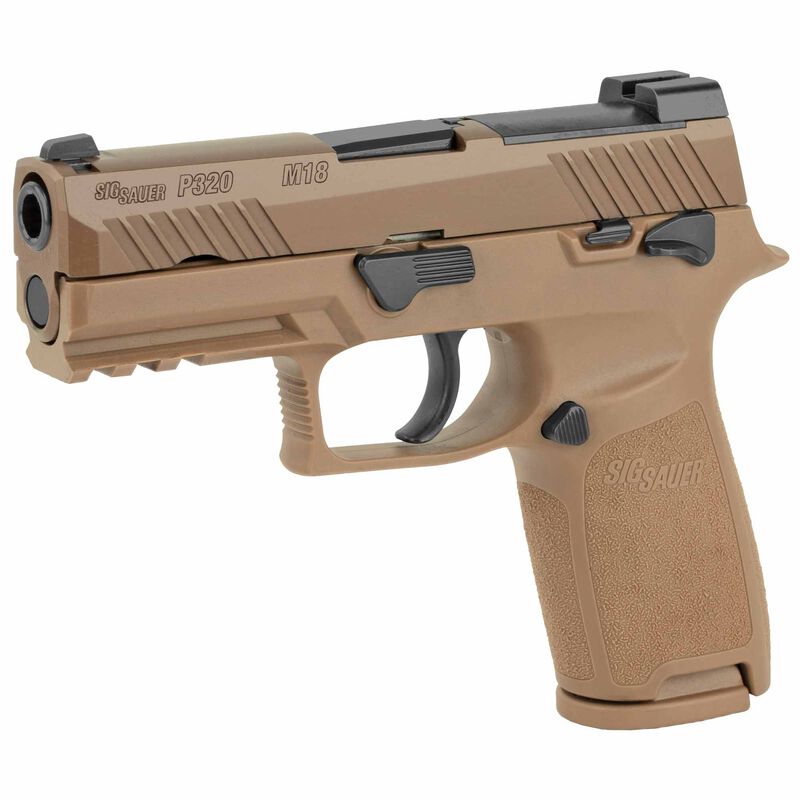 Not transferrable to other stores

Out of Stock at Baton Rouge, LA

Ship to Another Dealer (FFL)

Choose the dealer at checkout

Based on the US Military M18 model, the Sig Sauer® P320®-M18 Semi-Auto Pistol delivers the unmatched reliability, accuracy, and dependability you've come to expect from the P320 series. This compact-sized civilian version features an optics-ready, stainless steel, Coyote PVD-finished slide with a removable night sight plate for easy installation and quick removal of optics. The carry-length, polymer grip module features aggressive texturing for an enhanced, non-slip grip and improved control. The Siglite front sight and night sight rear sights deliver intuitive target acquisition in any lighting conditions, while the ambidextrous manual safety ensures safe handling and effortless engagement/disengagement with either thumb. The Sig Sauer P320®-M18 Semi-Auto Pistol comes with one 17-round and two 21-round magazines.

No questions answered for this product.

Have a Question About This Product?

7 total reviews for this product

Write A Review For This Product

I picked up the M18 a little over a month ago.  So far it's been a solid performer.  Except for a couple of glitches, I'm generally happy with it.

About a week after I got it, I mounted a Romeo 1Pro red dot on the slide.  I'm still not sure why Sig decided to put the mounting screws underneath the base plate.  You have to remove the firing pin assembly and the extractor to get to one of the screws.  It's not difficult and there are a couple of good videos online that show how to do it.  I'm also not sure why Sig made the 1Pro so wide.  With the protective steel shroud, there's a good 3-4 mm overhang on either side of the slide.

I've had a few FTFs, especially when the barrel is hot toward the end of a long training session.  I also had an unusual failure where a casing seized up and would not eject.  The entire weapon jammed.   Not just a little.  It was locked up tight.  None of us could free the stuck casing.  I thought I was going to have to take it to a gunsmith.  Eventually, I used the steel shroud of the 1Pro for some leverage and forced the slide back.  I wouldn't recommend using the shroud this way but I was very glad I had mounted it when I put the red dot on.  It did its job of protecting the sight.

I have been running inexpensive steel case target ammo for many years in a wide variety of gun brands with no issues.  This one particular casing had deformed into an oval during expansion.  Since then, I've only used brass ammo in the M18 and have had no more jams.  My other guns eat steel cased ammo like it's candy so I'm not overly concerned about being stuck with ammo I can't use.  If the M18 is your only firearm, I would recommend not using steel-case ammo.  Spend a little more for brass.

I'm going to end on a positive note.  The modularity of the Sig P320 M17/M18 system is a huge plus.  Like I already mentioned, I have a red dot on the M18 slide.  I still like to use iron sights so I bought an M17 slide/barrel kit.  Now I have the best of both worlds without having to carry 2 different guns to the range.  It takes literally seconds to swap slides.  I can let one "rest" while I exercise the other.

Smokey
Sig is the best!

Just picked mine up yesterday and im in love. Got $50 off for being a member so that was a plus! Very comfortable to shoot and I have fairly small hands(for a guy). Im kinda husky and im able to carry it iwb comfortably. However that will depend on what holster you choose and how you choose to carry but I digress. If the M18 is on your radar you definitely will not have buyers remorse this baby is nice!

Reviewer has purchased this product.

i was torn between this and the bigger brother the M17. i went with the M18 just for the shorter barrel .Overall they are the same pistol except for the barrel. Right out of the box it is ready to go with out any aftermarket parts in my opinion. it has night sights, two 21 round magazines, one 17 round magazine ambi slide release, front and a little velcro M18 patch. In terms of shooting the trigger breaks like glass and with proper grip it wont flip on you. i wear a large mechanix gloves and the texture of the grip and grip itself fits perfectly in my hand. The safety has a vert distinct click when you either engage or disengage it. the color is very nice as well and i personally added a TLR1-HL fde light.if your torn between this or the M17 the only thing it really comes down to is the barrel length. the only downside is that magazines are about a bit pricey but overall for the price you cant go wrong with this handgun. Plus the Marines are issued it so if it is good enough for us its good enough for all.

Reviewer has purchased this product.

I had the older brother the m17 and was looking for a smaller compact version and the m18 delivers. Ordered a wilson combat grip module for this bad boy and made me fall in love with it even more.

I just bought this beautiful and nicely made USMC issued pistol and I love it. It was more accurate and a better overall gun than my Glock 19x. As a Marine I had to have it.

Disclaimer: We aim to show you accurate product information and pricing. Please note that product pricing, images, descriptions, and specifications are provided from suppliers or manufacturers and have not been verified. We do our best to audit our product photos and descriptions, but we cannot guarantee an image or description to be correct; please contact customer service if you have specific questions about this product or inclusions.

Our mission is to promote responsible firearm ownership through an honest, engaged, and knowledgeable team effort. For over 10 years we've been raising the standards for safe, modern, and approachable indoor gun ranges to provide firearm owners of all experience levels a convenient place to shop, shoot and learn.

Experience the difference yourself with America's range!